Import data from a picture into Excel

Announced by Microsoft on 21st July 2022

In this latest article in our Future of Excel series we look at the new feature: import data from a picture.

No more typing numbers into Excel from a print out. Now you can simply take a photo of the page and load the data from the image straight into a table in Excel. Sounds pretty awesome.

So how does it work?

1. First up you need to capture an image of your data. 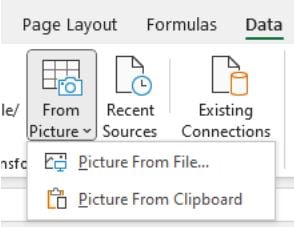 3. Excel will analyse the image
4. Review and then insert your data

This is a great new feature from the Microsoft Excel team.

The ability to import data from a printout is clearly a great addition to Excel's data import functionality.

For me the real winner here though is the screen print option. Excel's ability to import data from a website has always been pretty limited. I'm hoping that this new feature will up the game in this area.

The feature is currently available in the Office Insiders running Beta Channel Version 2207 (Build 15402.20002) or later.

The feature will be tested by the insider team and then released to all Excel users once finalised.

Our Future of Excel series

This series of articles focuses on new features soon to be released on Excel. This is based on announcements by the Microsoft Office Insider team.

See other articles in our Future of Excel series here.

The Future of Excel

In this series of articles we will look at the future of Excel.
Read More

How to use Excel's TEXTBEFORE Function